Voopoo has released the Drag Nano Pod Kit. The device was packed in a miniature aluminum case, decorated with epoxy and equipped with a 750 mAh capacious battery.

On April 10, Voopoo presented the Drag Nano Pod Kit in the all-in-one set instagram  . The device received a body in the style of the notorious Drag , but with much smaller dimensions and without buttons. The basis for the frame made aluminum alloy. The butt is traditionally decorated with multi-colored epoxy resin, available in seven colors. On the opposite side made a large logo. Micro-USB port and a small indicator placed on the bottom. The beveled upper corner was provided with a loop for the chain.

The compact device works with a small replaceable cartridge, a locking magnetic connector and a capacity of 1 ml of liquid, the filling hole can be found on the side. Inside, there is a GENE.pod board that works in a special “smart cold boot” mode that promises fantastic taste. For the battery meets the capacity of 750 mAh, the charging current for it should not exceed 0.5A. The output voltage varies from 3.2 to 4.2 volts, activation occurs when tightening.

The package includes a cartridge, chain, USB-cable and instructions.

iJust S is a novelty from Eleaf, aimed at newbies. The new device is designed to come to replace iJust 2 – one of the most popular electronic cigarettes in 2015.

IJust S has everything that the predecessor loved, and improvements were made. For example, the capacity of the built-in battery has increased – 3000 mAh.

The complete clearomizer is also modified – a top dressing and the ability to replace glass have been added. 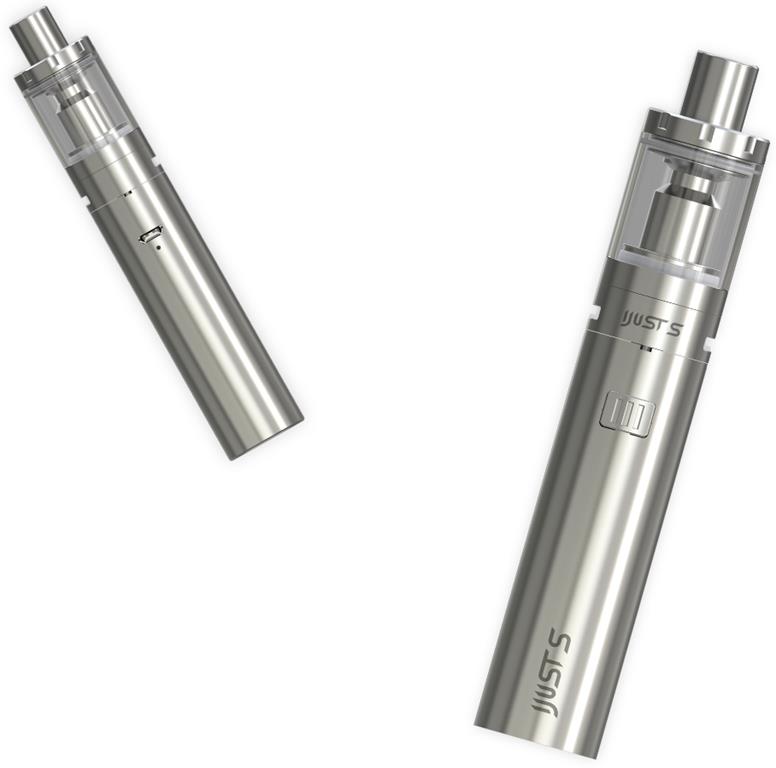 The set comes iJust S mod and clear with the same name. Assembled, they very much resemble iJust 2 – the manufacturer decided not to change the already well-established image.

Due to the supported low resistance and high power, iJust S is able to “pile” – that is, to produce a lot of thick steam.

The predecessor of iJust 2 is very popular because of this feature. No additional settings are required – just buy an electronic cigarette, refuel and soar.

The iJust S replicates its predecessor in style, but has become slightly larger in diameter – 24.5 mm versus 22 mm for iJust 2. A roomy battery increases the thickness of the device by only 2.5 mm.

But in length, the electronic cigarette became slightly shorter – 139 mm versus 148.5 mm in iJust 2. It was possible to achieve a reduction in length thanks to the updated motherboard.

iJust S has a modest size, but does not hide completely in the palm of your hand, so it will not work for unnoticeable soaring. The form of fashion is cylindrical. Despite the large thickness, the device fits well in the hand.

Clear and mod housings are made of stainless steel, the clearomizer flask is made of Pyrex borosilicate glass. There are two colors to choose from: classic steel and black.

This is a kind of innovation, since the entire iJust series was previously available only in steel color (except for iJust Start ). 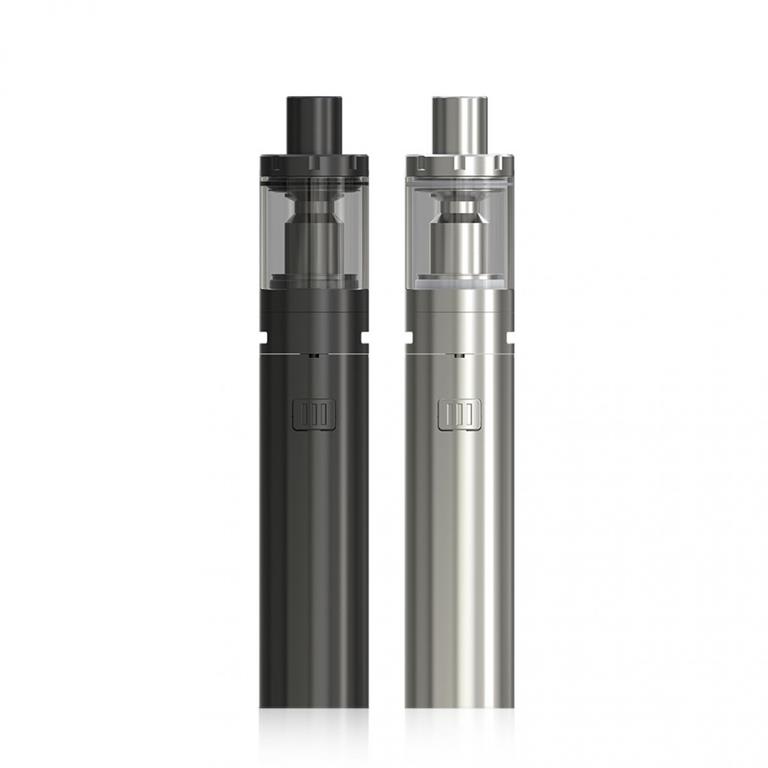 Build at iJust S is good. Model iJust 2 is often scolded for not very convenient and loud button, which over time could begin to fall. In the new device, the manufacturer listened to customers and replaced it.

Now it has become slightly larger and rectangular with corrugation, because of which it is better located with your finger. Also, the button is pressed very gently and with a much more pleasant click.

The problem with sticking is likely resolved too, but only time will tell.

The mod board independently selects the optimal power for the installed evaporator. Also, the power changes depending on the battery charge level – the higher it is, the more “fries” iJust S. Manual power cannot be adjusted.

The maximum power of pre-series devices provided to bloggers and reviewers for tests is 50 watts.

However, the tests showed that the same spiral on the modes with manual adjustment (for example, Eleaf iPower) at an exposed power of 50 W warms up more slowly than on iJust S.

Also, the device perfectly pulls a variety of windings with a resistance of 0.15 – 0.2 Ohm. Therefore, most likely, the maximum power of the device is higher than stated.

iJust S supports impedance from 0.15 to 3.5 ohms. If you wind the evaporator with less resistance, the protection will work and the mod will simply not be activated.

The iJust S battery has a large capacity and power, so it can be used with subomnary clearomizers and dripkami.

A diameter of 24.5 mm somewhat limits the choice of available clearomizers and drips – the usual models 22 and 23 mm in diameter will look bad.

But the perfect fit device with a diameter of 24 or 25 mm, however, they will have a barely noticeable “rim”. For example, iJust S battery looks good on GeekVape Avocado, Tsunami and Goon RDA drips, as well as Griffin 25 , OBS Crius Plus and Tornado Nano clearomizers.

It is noteworthy that many dripki released exactly in black or steel color – like iJust S.

Experts recommend winding on stainless steel and nichrome to work with iJust S – these metals react faster to the applied voltage and heat up.

The mod has a built-in battery with a capacity of 3000 mAh, which is 400 more than that of iJust 2. The battery is charged via the USB connector located on the side of the device.

Charging on a standard current of 1 A takes about 4 hours. The pastera function is officially stated in the device manual, so iJust S can be used during charging.

The minimum battery voltage is 3.3 V. Upon reaching this value, overdischarge protection will work. The device cannot be turned on until it is charged at least to 3.7 V. The charge level is indicated by the backlight under the Fire button:

As a device for beginners, iJust S has all the necessary protections:

In this case, the manufacturer specifies that the protection of the device is double – at the same time at the level of software and hardware.

The set comes clearomomizer iJust S with a capacity of 4 ml. The innovation of this tank (relative to iJust 2) in the upper filling is enough to unscrew the top cover and pour the liquid into the tank.

Unscrew the battery clear from the battery is not required. The filling holes are very wide, so you can pour liquid even from bottles with a thick spout. 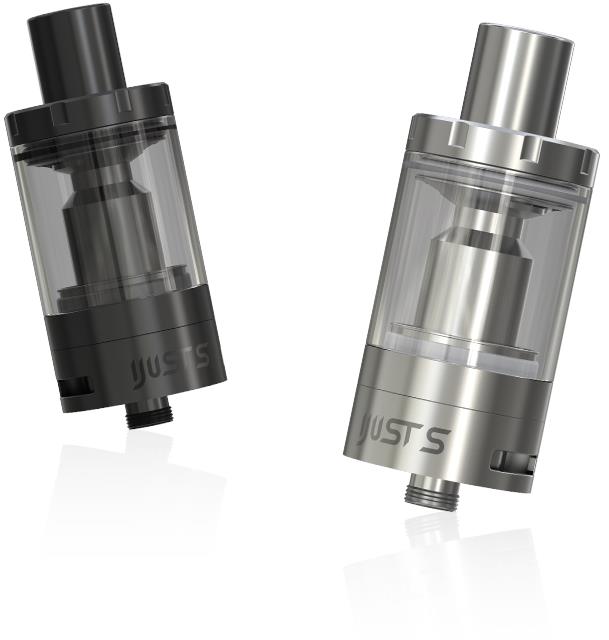 iJust S fully collapsible. Optionally, you can remove the glass or replace the mouthpiece on any other connector under 510. The blower adjustment function is implemented in a standard way for the iJust series – using a silicone ring worn on the clear.

True, unlike its predecessor, the iJust S has a ring of neutral white, not “acidic” green. The ridiculous ring was one of the most significant drawbacks of iJust 2. 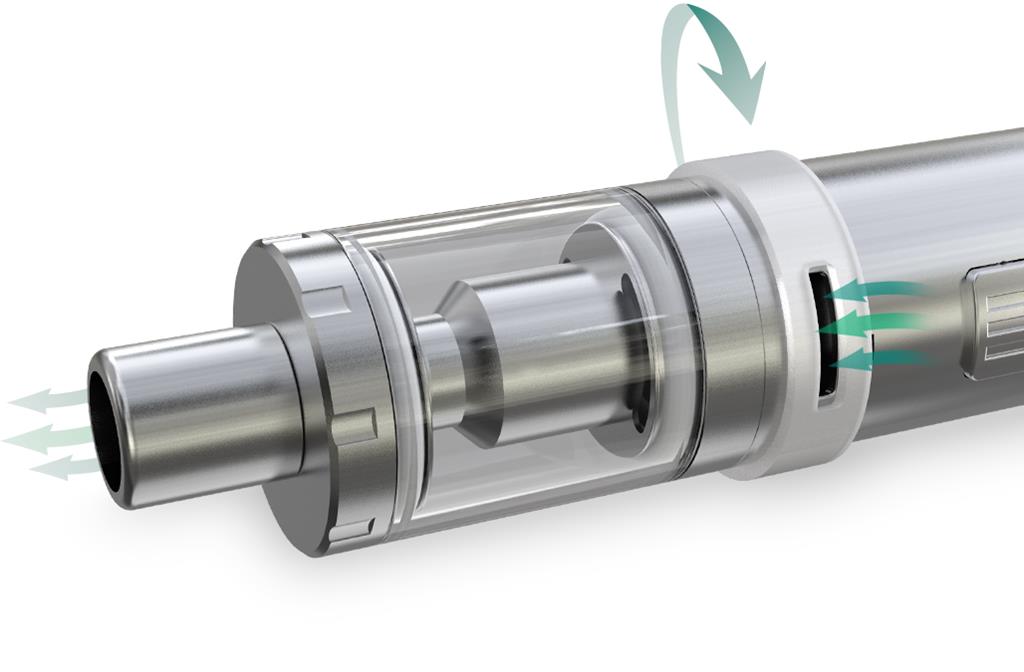 For iJust S, all vaporizers that could be installed in the iJust 2 or iJust 2 Mini are suitable . These are both the already well-known double-spiral cantal “heads” EC Head 0.3 and 0.5 Ohm, and the new double-spiral evaporators on stainless steel – ECL Head 0.18 Ohm and ECL Head 0.3 Ohm.

These new evaporators are designed for 50–80 W of power and have wider “windows” with a protruding wick, so they better serve the liquid on the coil and are less susceptible to the wick’s burning.

The manufacturer reports that with these evaporators, vaporization and transfer of taste will be even better than with standard evaporators of the EC series.

Special ceramic coating around the helix extends the service life and cools the steam.

You can also install an RBA-base from Atlantis or the official one from Eleaf itself – ECR Head, which was developed for iJust 2, which means it will work for iJust S. 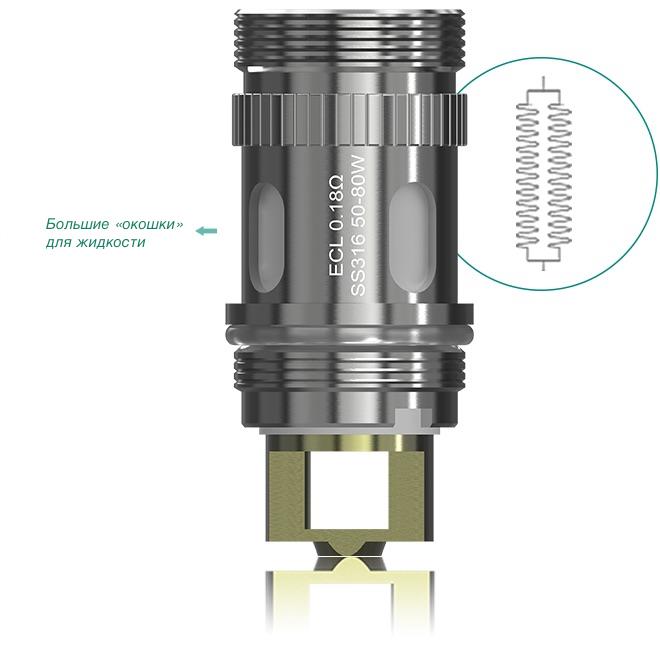 The mod is locked and unlocked by pressing the Fire button five times. No additional adjustments are provided.

More details can be found in the official instructions in Russian.

Traditionally, iJust series devices come in a good configuration. iJust S is no exception. In the set are: 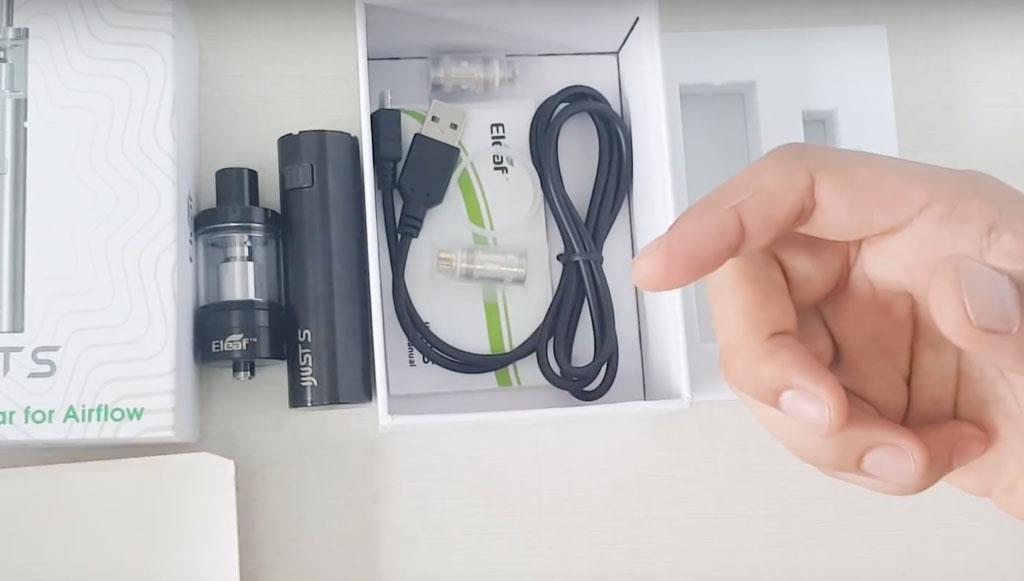 Feedback and experience of use

At the time of publication, iJust S is still at the pre-order stage, so only those who Eleaf has provided pre-production samples have experience using.

According to reviews of such people, the mod has become even better than its predecessor: an enlarged battery, a top refueling, a corrected button. The spiral on the standard evaporators began to heat up very quickly.

With all this, the dimensions of the device almost did not grow. On the contrary, vapers note that 24.5 mm is a visionary move by Eleaf, because today a lot of clearomizers and drips come out with a diameter of 24 and 25 mm.

Thanks to this iJust S will not become obsolete for a long time. Even if the complete clearomizer stops arranging a bather, he will be able to purchase a new clear or even a drip by installing it on an iJust S. Battery.

Beginners need to keep in mind that this device (like its predecessor iJust 2) produces a lot of hot steam and is designed for a slight hookah pull. Vapers like this, but it can be unusual for a user who has just switched from regular tobacco cigarettes.

iJust S is a clear claim to success. All the strengths of iJust 2 are preserved, and the main drawbacks – the unreliable button, the “acidic” silicone ring, and the non-removable clearom glass — are fixed. Given the popularity of iJust 2 for beginners and professionals, it is safe to say that iJust S is doomed to popular love.

At the end of 2017, many manufacturers tried to repeat the success of iJust S and created similar devices. See iJust S comparisons with competitors .

At the beginning of 2018, an updated device model was released – iJust 3, with an updated design and with new evaporators with a “spiral” in the form of a grid. See the  review of Eleaf iJust 3 , as well as its  comparison with competitors .

At the end of 2018, an updated iJust ECM model was released, with an updated design, a button and evaporators on a grid suitable for iJust S. See the review of Eleaf iJust ECM , as well as a comparison of iJust S / iJust 3 / iJust ECM models.

At the end of February 2019, the “Aijast” 21700 came out with a removable battery and evaporators on a grid with innovative leak protection technology and a self-cleaning function.

I wonder what our readers think about Eleaf iJust S? You can write your opinion in the comments below.